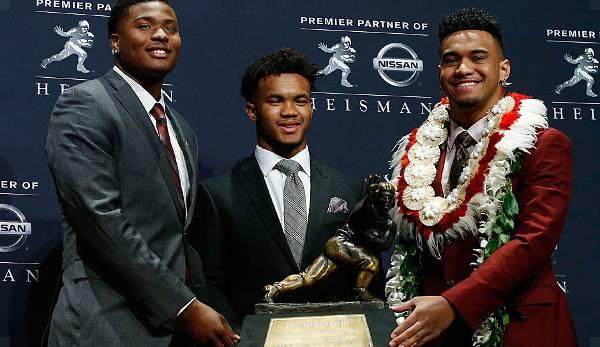 The choice for the Heisman Trophy has been made – and the best college player of the year resides with the Oklahoma Sooners for the second year in a row! Quarterback Kyler Murray prevailed over Tua Tagovailoa.

Murray thus defended for Oklahoma the title that Baker Mayfield had won last year. Murray received 2,167 points at the end from the Heisman voters, Tua was just behind with 1,871 points.

Never before has a runner-up in the Heisman election had so many points. Dwayne Haskins (QB, Ohio State/783 points) and Will Grier (QB, West Virginia/126 points) were clearly beaten in the end.

“This is crazy. It’s an honor, something I’ll never forget,” Murray said during his acceptance speech. Murray is the seventh Heisman winner in Oklahoma’s history. The Sooners are thus on a par with Ohio State and Notre Dame in terms of most of the Heisman Trophy winners.

The unusual distribution of points at the top of the election is also reflected in the course of the season. Alabama’s Tua Tagovailoa was almost always the seemingly clear favourite for the title – until he had his worst game in the SEC Championship Game the week before and was injured prematurely.

Murray, on the other hand, played an outstanding final phase of the season and was repeatedly forced to play big games due to a desolate defense of his own. Tua, however, has a direct chance at revenge: on 29 December, Alabama and Oklahoma meet in the semi-finals of the college playoffs.

For Murray it could be the last college football games now – and also the last football games in general. Already in spring he was selected by the Oakland Athletics in MLB-Draft at position 9 and agreed to a contract with a signature bonus of 4.66 million dollars.

Although he could play another year at college and many experts see him as a potential top pick in the NFL draft, Murray plans to give up football for baseball. He confirmed this after the ceremony on Saturday evening: “Today everyone knows that I will play baseball. But I’m not worried about that at the moment.”